The draft Development Plan (DP) for the 23 villages to be merged into Pune’s Municipal limits has been more or less finalized. It has given emphasis to the Pune metro, and it also proposes to increase the permissible height for high rises in the established parts of the city from 100 metres to 150 metres. Vertical growth is obviously the only way to go in the areas of Pune where horizontal spread is no longer possible. 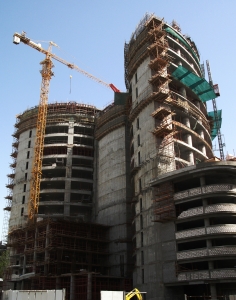 There is great potential for Pune real estate, and the Development Plan is supposed to aid its growth. However, there are some major areas of concern when it comes to its efficiency in doing so. One of the prime concerns is the process involved in formulating, finalizing and implementing the DP in the first place.
This process comes under the purview of the MRTP Act for urban growth in Maharashtra. As it stands now, it is archaic and extremely slow-moving process. To begin with, just getting it from the blue-print to approval stage involves several agencies. Only when the required approvals have been obtained from all these agencies can the Development Plan be finalized by the Chief Minister and implemented by the Pune Municipal Corporation.
This is an extremely cumbersome process, and the amount of red tape it takes to finalize and implement the Pune Development Plan is enormous. It should be remembered that the Government of Maharashtra has to handle the approval and implementation of the Development Plan in tandem with countless other proposals from all over the State. This is why this process usually takes anything between 10-15 years to be finalized and put into actual practice.
These huge delays further give rise to vastly increased costs, wasted time and negatively impact on the city’s GDP. At this critical juncture of deployment of Pune’s development Plan, it would make sense to look at more progressive models of planned urban development. The Government of Maharashtra could consider the method that has worked so well in Ahmedabad in close-by Gujarat and in the neighbouring Pimpri Chinchwad Municipal Corporation.
There are good reasons for considering the Pimpri Chinchwad Municipal Corporation as a suitable role model for progressive urban development. Only recently, the PCMC was honoured with the ‘Best City in India’ award at the hands of the Prime Minister himself. Pune’s booming sister city simultaneously received two further national awards under the Jawaharlal Nehru National Urban Renewal Mission (JNNURM) for the improvements made in its water supply and waste water management, and for effective enforcement of policies aimed at the Economically Weaker Sections.
What is this progressive model of urban development that could transform the PMC, as well? In simple terms, it involves three distinct, time-bound stages. In the first stage, the Government acquires land under roads and reservations at a stipulated rate or in the form of TDR (Transfer of Development Rights). A blueprint for complete social and civic infrastructure creation of the new zones to be developed is then drawn up. This includes roads, water and electricity supply as well as designation of areas for residential development, schools, shopping, hospitals, workplace hubs and industry.
The laying down of this infrastructure can then put on the fast track by creating a Special Purpose Vehicle for a dedicated infrastructure fund. Pune’s new Development Plan will a certain number of kilometers of road length. The total cost of road development can be calculated and the cost per square foot could then be loaded on to the residential development of these areas in the next stage. Interestingly, this cost is very minimal and can be easily borne.
With the kind of will and focus that was displayed by PCMC when it used this model, the entire road development and civic infrastructure development can be completed with three years. At this stage, the newly established and fully infrastructure-enabled areas are then opened up to developers for residential and commercial development.
The advantages of such an approach are manifold. In the first place, there is a uniform, horizontal spread of real estate. Development does not take place in pockets, but in a scientific manner. The creation of road networks and electricity and water supplies before actual real estate development ensures that property prices remain rational and equitable. There would be a very favourable effect on the affordability of homes in these new areas. All these factors together ensure that there is optimal economic growth that benefits everyone.
The Government of Maharashtra has already committed itself to fast-track growth of its cities. By adopting the above-mentioned model, this commitment can actually bring real-time results.

Anil Pharande is Vice President of CREDAI Pune Metro and Chairman of Pharande  Spaces, a leading construction and development firm that develops township properties in the PCMC area of Pune, India.