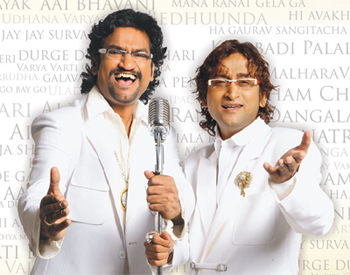 Ajay Atul, the Marathi music composer-director duo, which has created a storm in Maharashtra, picking up a bushel full of awards in the last decade, will perform before an estimated audience of over 25,000 music lovers at the Balewadi Sports Complex on Saturday, the 29th of January. Their orchestra of 110 musicians will back iconic singers and performers like Hariharan, Shreya Ghoshal, Kunal Ganjawala, Abhijeet Sawant and Vaishali Samant.
Ajay Atul combine traditional Maharashtrian music with a modern rhythm and beat. They use centuries old musical styles like Jagran, Gondhal, Lavani and Bhaktigeet as well as today’s rock and pop. Their eclectic choice of instruments includes the Dhol, Dholak and Basuri, as well as synthesizers, blending them together into heady, contemporary compositions.
“When the idea was put forward by Mr. Pharande, we knew we had to work this out, because we would never miss a chance to perform in Pune We’ve added surprise elements and performers in our concert this year which is especially designed for Pune.” said Atul Gogavale.
Pharande Spaces, the well known, innovative Pimpri-Chinchwad based Developers; have a lot in common with Ajay Atul’s music, since they too, create environments like Woodsville and Celestial City, which foster traditional culture and community bonding in a modern ambience, comprising a mélange of apartments, row houses and villas, in a setting which includes fine dining, shopping, varied sports and entertainment.
“The venue, Balewadi, being close to Pimpri-Chinchwad, will give our friends and well wishers spread across PCMC and Pradhikaran, a wonderful chance to enjoy an entertaining evening and will also serve to awaken interest in the classical Maharashtrian musical tradition among the present generation” says Mr. Anil Pharande, Chairman, Pharande Spaces.
This concert is also a splendid, opportunity for Pharande Spaces to implement their Corporate Social Responsibility. It will promote awareness of social concerns faced by our society as a whole, and in particular, will give an impetus to organizations like the Prabodhan Trust and the Pimpri Chinchwad Social Foundation who are dedicated to providing affordable solutions for treating diagnosed health ailments in young ones, as well as promoting all cultural and social activities that promote our tradition.
Posted by: Avinash Gokhale