Anil Pharande, Chairman – Pharande Spaces
Planning In Real Estate
Planning is an inalienable component of real estate development. This is why buildings are engineered, not built randomly. While developing a project, this means that the builder follows a pre-determined design provided by an architect, who has based his or her design on proven engineering principles.
This planning ensures that the building’s structure has a prescribed foundation depth and distributes weight uniformly so that it can withstand internal and external stresses. The engineering aspect of project design also ensures that living units are proportionate and that the available space within them is optimally used. 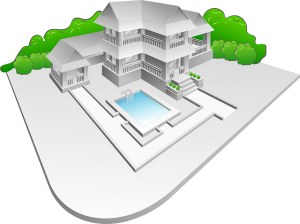 In a residential complex, the planning aspect is extrapolated beyond individual buildings. The architect’s job is to engineer the project in such a manner than the buildings are distributed according to plan across the plot, and that open spaces, parking spaces, internal roads and common utilities are exactly where they are supposed to be. In larger townships, the planning aspect becomes even more involved because of the larger area.
Planned Cities
All these are expected factors when it comes to real estate projects. But when such detailed planning is applied to an entire city, its benefits are vastly magnified. Architects, engineers, town planners, government agencies and builders approach the development of the whole city as though it were one large integrated complex.
This takes a huge amount of planning, coordination, investment and effort, but the results are obviously worth it. This is how the Pimpri-Chinchwad Municipal Corporation came into being. This is what sets it apart from other cities and into the same bracket as other planned municipalities like Chandigarh.
Today, the PCMC is a model city which is the result of careful planning of economic, social and real estate development. Unlike in the other regions in Pune, PCMC’s town planning authorities have scrupulously shielded the city from the ad-hoc development that has paralyzed the rest of Pune. The futuristic thinking and high vigilance that has been employed in developing this region has resulted in an avant-garde satellite city which adds a whole new dimension to the Pune’s real estate market.
Planned Cities Which Began Well And Ended In Chaos
From the start, planning authorities of the PCMC were determined not to repeat the mistakes committed in other cities which were originally meant to be immaculately planned municipalities. They started off on the right note, but the planning aspect soon decayed and gave way to the kind of unregulated growth that has destroyed the urban fabric of most Indian cities today. Some of the examples of failed attempts to produce planned municipalities in India are:

In each of the above cases, what had begun as a regulated real estate development process soon turned to a commercial expansion. PCMC on the other hand, adopted a smarter blueprint from the start. No scope had been given to nearsighted development. PCMC was always meant to be the city of the future where residents could enjoy the benefits of 100% infrastructure-based, community-oriented real estate planning and development.
Real Estate Demand Drivers In PCMC
Demand for residential real estate in a successful satellite city is created when there is a right balance of infrastructure, a stress-free lifestyle and employment opportunities. Additionally, there has to be good connectivity to the parent city. In context of PCMC, these are:

PCMC is a perfect example of how satellite cities can surpass the central city. Here, the retail, commercial and residential markets work together symbiotically to create a winning proposition for end users and investors alike. When compared to Pune, PCMC has a much higher availability of green spaces, superior social fabric and vastly better infrastructure. Thanks to better land availability, PCMC also provides the most opportunities for real estate developers to create large integrated townships, which have are nothing short of a blessing for Pune’s residents.
About The Author:
Anil Pharande is Chairman of Pharande Spaces, a leading construction and development firm that develops township properties in Western Pune. Pharande Promoters & Builders, the flagship company of Pharande Spaces and an ISO 9001-2000 certified company, is a pioneer in the PCMC area offering a diverse range of real estate products catering especially to the 42 sectors of Pradhikaran. The luxury township Puneville at Punavale in West Pune is among the company’s latest premium offerings.

Come Home to The 4 BHK Experience At Puneville