Pharande Spaces, the leading real estate development company in the Pimpri-Chinchwad Municipal Corporation, today announced the launch of three new towers at its highly successful luxury township L-axis. The announcement was made at a glittering ceremony that was attended by world-renowned architect and town planning expert Prof. Christopher Benninger, architect Mrs. Usha Rangarajan and Ravi Varma, Vice Chairman of the National Association of Realtors.
L-axis, one of the most successful township projects in the PCMC, has made a resounding market statement as the address of choice for HNIs from the PCMC, Pune and beyond. The location of this township has been one of the main catalysts for its success.
In a relatively short period after its inception, Spine Road in the Pradhikaran region of Pune’s thriving twin city PCMC has become one of the most talked-about investment locations. The 22-kilometer long and 45 meter-wide Spine Road connects to all sectors in the PCMC and the areas along it have become key development hotspots in the region.
Demand for homes in this area began peaking when the PCMC began further widening of this key transit infrastructure project. The Pradhikaran region, also known as Sector 42, encompasses a total area of 15000 acres and is a text-book case of planned development by the Pimpri Chinchwad New Town Development Authority PCNTDA.

Anil Pharande, CMD – Pharande Spaces
“Road infrastructure is always the precursor of all successful real estate undertakings,” says Anil Pharande, Chairman – Pharande Spaces. “New real estate locations need to be properly connected to other parts of the city to make them attractive to developers and home buyers. For this reason, Spine Road in Pradhikaran has become a game-changer. Apart from its location, L-axis enjoys the benefits of the most luxurious project design, specifications and amenities as well as unmatched connectivity.”
Because of the Pimpri-Chinchwad Municipal Corporation’s forward-looking approach to infrastructure, the PCMC has always been the forerunner of highly planned infrastructure-driven real estate development in the Pune region. The impeccable town planning employed in the PCMC has ensured that there is a full-fledged district centre for commercial development and activity. This approach has provided a uniform spread of well-paid employment opportunities over the entire region. 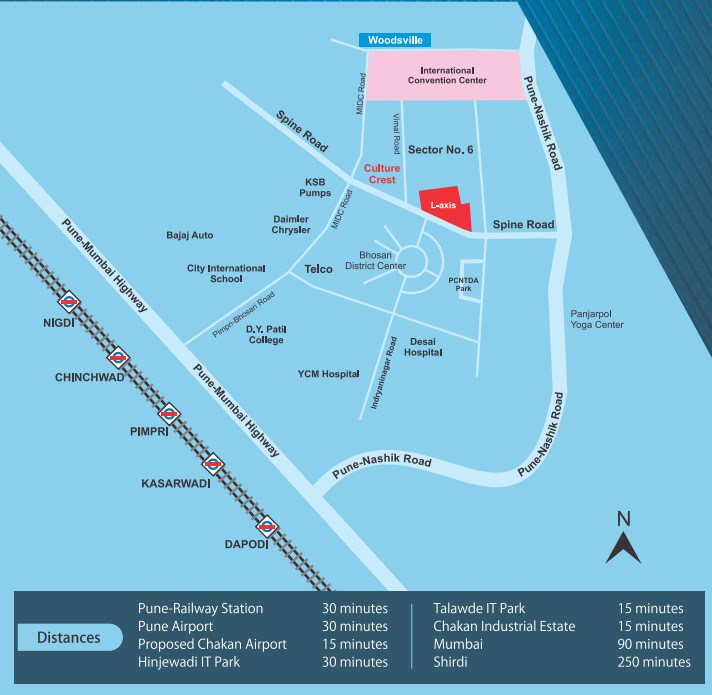 L-axis is located in Sector 6, directly opposite the Bhosari District Centre with its high-profile corporate and government office complexes as well as a 5-star hotel and the recently launched ‘City One’ – PCMC’s first full-fledged shopping mall. The prestigious International Convention Centre is under construction in the immediate vicinity.
Mr. Pharande says, “Over the years, the ‘infrastructure first’ approach has been especially evident in PCMC’s Pradhikaran sector, where the Spine Road has now become one of the most exciting locations for home buyers and real estate investors. L-axis has indeed benefited from the perfect location.”
Pharande Spaces has already distinguished itself delivering high quality township projects such as Woodsville in Moshi, Celestial City at Ravet and more recently Puneville at Punavale in this prosperous and progressive region.
Launched in 2012, L-axis was conceived in response to the huge demand for luxury apartments in pune emanating from top management home buyers of the region’s many manufacturing giants, the Chakan industrial area and international automobile companies like Volkswagen, Mercedes Benz and Mahindra & Mahindra and General Motors.
Pharande Spaces launched the two new towers at L-axis in the presence of a 300+ gathering of channel partners and prominent real estate personalities. In the course of the evening, the company made a strong case for the unprecedented market proposition of this unique luxury township. The event was followed by a celebrity performance.