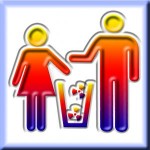 Facing the daunting task of managing garbage disposal, the Pimpri Chinchwad Municipal Corporation (PCMC) has planned to work on a ‘zero garbage’ system, implementing it in one housing society on an experimental basis.
The system requires two small machines for composting wet garbage and to generate fertiliser. If the experiment is found successful, the PCMC will replicate the model in big housing complexes, hotels and hospitals before making it mandatory for the twin towns to follow the system.
PCMC chief medical officer, Nagkumar Kunchagi said, “It is mandatory for municipal corporations to dispose of waste in a scientific and mechanised way under the Jawaharlal Nehru national urban renewal mission (JNNURM). As residents opposed the PCMC’s vermi-composting plant at Moshi garbage depot, the administration has proposed a garbage depot in Punawale. But this project also met with opposition from local farmers. It is now a serious issue for the civic body as to how to dispose of waste in future.”
“We decided to follow the new ‘zero garbage’ policy after finding that vermi-composting system adopted by housing societies was working 100%. As against the traditional method of garbage disposal that takes nearly 20 to 25 days, the new system takes just 8 to 10 days,” a civic official said.
To create public awareness about the new system, the civic body will implement it in a housing society on a trial basis and will extend it to one hotel also.
“The civic body will bear the expense of installing the two machines in the initial phase,” a health official said. The PCMC health department had invited bids for buying these machines through e-tendering.
“Two machines, a 30-kg capacity machine at a cost of Rs8.50 lakh for 30 families and 50-kg capacity machine priced at Rs12 lakh for 50 families, have been earmarked,” a civic official said.
The administration hopes that if the ‘zero garbage’ system turns out to be successful, it will reduce the cost of garbage collection and streamline the whole process of garbage disposal, besides saving manpower.
The PCMC has recently started house-to-house garbage collection on public-private-partnership (PPP) basis in Ward A and D. Nagkumar said, “Several housing societies that have adopted vermi-composting system face difficulty in disposing of water and non-vegetarian food waste. ‘Zero garbage’ system will try to solve this problem.”