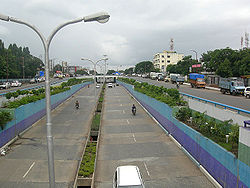 These days, I am often being asked about the vision for the industrial town. I believe the times in which we used to plan for the year ahead are over. We have chalked out our course of action for the next 20 years. After Mumbai became congested, people turned towards Navi Mumbai, which is now the centre of rapid infrastructural development. We look forward to Pimpri-Chinchwad as a similar option for Pune. We want to project Pimpri-Chinchwad as New Pune.
Our first priority is development of roads. Roads are like arteries for a city. If arteries are healthy, the city remains healthy. We will be focusing on developing broadways, roads with better designs and better safety.
We will also be amending development control rules for the city in the coming months. Let me give you am example of planning. We have chosen 12 important roads in the city. On these 12 roads, we will have entirely different sets of rules. These roads would be much wider, there would be much larger parking space and side space for buildings. Double the floor space index (FSI) would be allowed on these roads. These roadways would be the business hubs for the city.
Efforts will also be made to improve the quality of the bus rapid transit system. We are also doing a survey for Metro. It will have to be made sure that maximum number of people travel by public transport.