Anil Pharande, CMD – Pharande Spaces
The Pimpri Chinchwad Municipal Corporation first came into the limelight as an industrial area. However, it also has an advantage that central Pune does not – planned development. The growth of the real estate sector in the Pimpri Chinchwad Municipal Corporation is closely regulated by the PCNTDA, which works together with the PCMC to ensure planned and realistic growth.
Central Pune continues to suffer from pollution, depleting greenery, traffic jams, water and power scarcity, lack of proper infrastructure and unrealistic residential property rates. Meanwhile, Pradhikaran (the location that defines the PCNTDA) has been benefiting from sensible real estate development.
If one studies the demographic development of Pune real estate growth, it is evident that Pradhikaran is precisely where the city’s growth is headed in the North/North-Western direction. This is extremely significant in terms of long-term residential property investment.
The Importance Of Pradhikaran
In years gone by, the PCNTDA began to acquire land in the PCMC area so that planned development could take place in the future. This planning included the allocation of specific areas for industrial activity, residential property development, public parks, unobstructed spaces, shopping centres, office buildings, roads and utilities.
Water supply to all sectors was ensured by the construction of several mammoth water tanks, each with capacities of several million litres, before development was permitted in each sector. Once this was done, the PCNTDA made the developed land parcels available to property developers.
The PCMC master plan also provides for generous road widths, the likes of which are impossible elsewhere in Pune. This goes a long way in preserving one of Pradhikaran’s natural splendour and hygiene.
Because of these factors, and also because of the growth in the PCMC industrial belt, the last two years have witnessed a huge increase in demand for residential property in the Pradhikaran area.
The fact that a number of large international companies are operating in nearby Chakan has, in fact, been a primary criterion for the area’s development profile. These companies regularly deliver thousands of jobs at all levels, which has had a telling effect on Pradhikaran’s general economic status. Specifically, there has been a huge surge in demand for residential property there.
Pradhikaran’s expansion, which has been inspired by the Chandigarh model of controlled development, began with a few hundred acres. Today, the area speaks for more than 7000 acres. Pradhikaran is continually seeing infrastructural enhancements on all fronts – including roads, water and electricity supply and digital connectivity.
Pradhikaran now boasts of massive integrated township projects that offer all the hallmarks of ambient, sustainable living. Apart from the high lifestyle quotient, the investment potential of these townships benefits from a magic mix of real estate market drivers. The presence of Tata Motors, Talawade, Hinjewadi, Chakan and the Pimpri-Chinchwad industrial belt add to the value of these townships, while the Mumbai-Pune highway and Expressway make it advantageously accessible to the financial capital of Mumbai.
No wonder that Pradhikaran is now being seen as both, the best option for first home buyers, and as the new residential property investment hotspot in Pune’s real estate market.
The International Convention Centre At Moshi
To further boost Pradhikaran’s real estate profiling, the deployment of the new Pune International Exhibition & Convention Centre at Moshi has been put on the fast track. This world class piece of infrastructure is going to open the floodgates to a new wave of demand for real estate in the northern parts of the Pimpri- Chinchwad Municipal Corporation. This is one of the best examples of how planned growth and foresight can ensure that an entire city’s real estate fortunes reach for the stars. 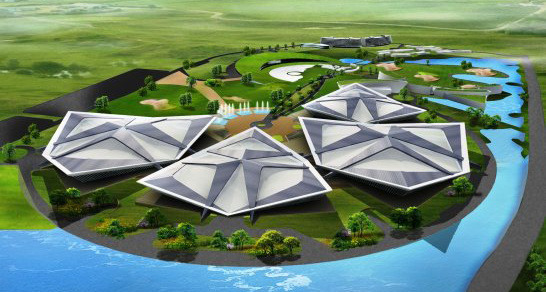 There were a couple of decisive factors involved in choosing this location as the venue for the international convention centre. First and foremost, PCMC boasts of a prolific manufacturing sector where a number of global industry giants have their plants. The arrival of this Convention Centre will be a major boost to these industries, who will be able to host and attend massive international business events.
This benefit also applies to the IT occupiers of the Software Parks at Hinjewadi and Talawade, which are also in the vicinity. Secondly, only the Pimpri Chinchwad Municipal Corporation could offer the 240 acres over which this Rs. 600 crore project will be developed.
With the arrival of this project, the PCMC will become the primary focus for an increasing number of global-scale business events in Pune and Mumbai, as well. After all, this will be the largest such Convention Center in India. It will incorporate seven convention halls of 10,000 square meters each, a 600-room 3 star hotel, two 5 star hotels, an eco-friendly 9-hole golf course and parking space for 3500 vehicles.
At a rough estimate, a minimum of 30 major exhibitions and conventions will be held there annually. No other event venue in and around Maharashtra or anywhere else in India will be able to match its state-of-the-art facilities and sheer opulence, grandeur and overall enablement.
The Pune International Exhibition and Convention Centre (PIECC) at Moshi will number among Asia’s biggest industrial convention centres. This convention centre is going to be a game-changer not only for the industrial belt in PCMC but for Pune in general.
Once this convention centre is complete, PCMC will become the natural hub for automobile conventions. This centre will have the capability of hosting conventions on an international scale, with a total of seven massive exhibition halls and a central open exhibition ground. It will have a staggering seating capacity of 20,000. In order to provide a complete global experience to the delegates, the convention centre will also have a five-star hotel, a golf course and a retail mall adjoining it.
A significant part of the land adjacent to the Pune International Exhibition and Convention Centre will be offered to private developers to build commercial and residential projects in Moshi. It can well be imagined what an effect such an advantageous location will have on the residential property prices in Moshi, PCMC. Obviously, the convention centre will generate massive white-collar employment, and the demand for quality housing around it will rise astronomically.
This makes the areas around the Pune International Exhibition and Convention Centre one of the most important property investment hot-spots ever to have surfaced in Maharashtra. In the years to come, the investment value of a home in strategically located township projects in its vicinity will rise astronomically.

Township projects such as Pharande Spaces’ Woodsville, which is located exactly opposite to the convention centre site, obviously have an early-mover advantage.
L-axis – The Luxury Housing Township Of The Future
Another integrated township by Pharande Spaces called L-axis – an ahead-of-its time luxury homes offering – is also located in Pradhikaran and has the added benefit on being on the Spine Road, which has become one of the most talked about infrastructure embellishments in PCMC. This area is fundamentally at the core of Pune’s most vibrant industrial area, with many manufacturing giants such as Tata Motors, Force Motors and Bajaj Auto close by. 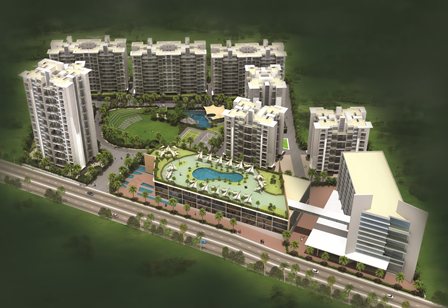 It is also well-connected to the Chakan industrial area, which is home to national and international automobile companies like Volkswagen, Mercedes Benz and Mahindra & Mahindra. Apart from this, the Talawade IT Park is also within easy access.
In addition, L-axis is advantageously close to the Bhosari District Centre, Sadhu Vaswani International School, Sri Sri Ravishankar Vidya Mandir, the PCNTDA Traffic Park and the upcoming International Exhibition and Convention Centre at Moshi. The project will feature technologically advanced security and lifestyle features to its residents and boasts of vast green spaces, with paved area kept at a minimum.
L-axis is the luxury apartments in pune, this project includes a modern clubhouse with gymnasium, tennis and basketball courts, a multi-purpose community hall and a massive water-world-style swimming pool that offers limitless enjoyment to all family members.
In these two projects, homebuyers from Pune and PCMC finally have the perfect combination of an elite lifestyle in an internationally renowned neighbourhood and tremendous appreciation potential.