Anil Pharande, CMD – Pharande Spaces
Historically, industrial convention centres have consistently proved to be giant economic drivers to local economies. There are significant economic benefits to the immediate and expanded communities in and around these centres. Delegates and exhibitors who vist these convention centres from out of town and other countries bring in huge amounts of revenue.
This flow of external capital into the location gives rise to a multiplier effect, because the revenue which is generated then proceeds to circulate through various other businesses in that area. An entirely new and vibrant supplier chain is established for the maintenance of hotels and facilities management companies that service these centres.
The revenue flow percolates down to the employees of these establishments, and down to local groceries and similar community-centric businesses. In other words, convention centres upgrade the entire demographic profile of the locations in which they are built. 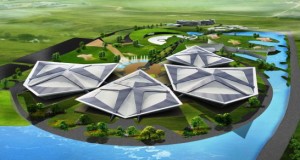 The Pune International Exhibition and Convention Centre (PIECC) at Moshi in the Pimpri Chinchwad Municipal Corporation will number among Asia’s biggest industrial convention centres. It will covering a total of 240 acres and is being developed by the Pimpri-Chinchwad New Town Development Authority (PCNTDA) through a special purpose vehicle (SPV). The PCNTDA has a 94% stake in this project.
The PCNTDA has an immaculate track record for timely and well-planned development in the Pimpri chinchwad Municipal Corporation. Despite,certain initial delays, the fact that the PCNTDA is a majority stakeholder in the PIECC guarantees that this project will see completion. This convention centre is going to be a game-changer not only for the industrial belt in PCMC but for Pune in general.
The automobile industry in Pune will benefit most significantly from the availability of an international convention centre. This industry has been growing in leaps and bounds, with every national and international automobile giant now having a manufacturing plants in and around Pune.
Pune is now considered as India’s foremost automobile industry nexus and numbers among the world’s leading automotive centers. In fact, the Chakan-Talegaon region has emerged as one of the most vibrant automotive clusters on the face of the planet. The list of leading automobile manufacturers with plants in this region is a veritable Who’s Who os the automobile world:

Obviously, the venue for the Pune International Exhibition and Convention Centre was chosen for its strategic location near these automotive giants. Once this convention centre is complete, Moshi in PCMC will become the natural hub for automobile conventions. This centre will have the capability of hosting conventions on an international scale, with a total of seven massive exhibition halls and a central open exhibition ground. It will have a staggering seating capacity of 20,000. In order to provide a complete global experience to the delegates, the convention centre will also have a five-star hotel, a golf course and a retail mall adjoining it.
A significant part of the land adjacent to the Pune International Exhibition and Convention Centre will be offered to private developers to build commercial and residential projects in Moshi. It can well be imagined what an effect such an advantageous location will have on the residential property prices in Moshi, PCMC. Obviously, the convention centre will generate massive white-collar employment, and the demand for quality housing around it will rise astronomically.
This makes the area around the Pune International Exhibition and Convention Centre one of the most important property investment hot-spots ever to have surfaced in Maharashtra. The effect that it will have on property prices will be more pronounced than even that of the Hinjewadi IT park.
Township projects such as Woodsville, which is located exactly opposite to the convention centre site, obviously have an early-mover advantage. In the years to come, the investment value of a home in such strategically located township projects in Moshi will rise astronomically.
Anil Pharande is Vice President of CREDAI Pune Metro and Chairman of Pharande  Spaces, a leading construction and development firm that develops township properties in the PCMC area of Pune, India.