The launch of Puneville, the game-changing, futuristic luxury township by Pharande Spaces at Punawale on India’s 68th Independence Day drew massive attendance of eminent dignitaries and real estate industry stakeholders. After hoisting the tricolour was hoisted at the launch venue to the refrains of the national anthem, Hemant Naiknavare – President, CREDAI Pune addressed the gathering and was generous in his praise for Puneville’s never-seen-before features. 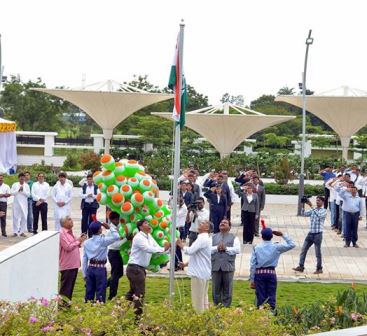 “Puneville is a brilliantly conceived and executed luxury township,” he said. “Pharande Spaces, in partnership with globally acclaimed architects Aedas, have outdone themselves by delivering a fantastic residential project. The timing of this launch is perfect, because Puneville is the ultimate celebration of freedom of an ultra-modern lifestyle. Also, thanks to Pune’s rapidly accelerating Information Technology boom, demand for such ultra-modern township homes has never been higher.”
After the inaugural address, Kamlakar Akode, Director – Town Planning (Maharashtra) elaborated on the progressive ‘infrastructure first’ approach that is the hallmark of real estate planning and development in Pune’s progressive PCMC region, and added that Puneville is a fitting tribute to this futuristic approach which has set a new benchmark for Indian real estate. 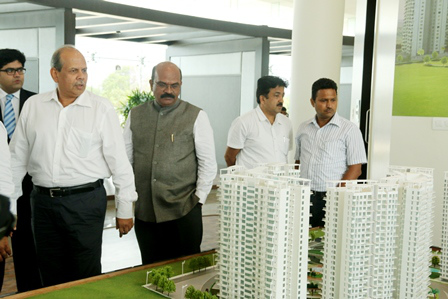 Addressing the gathering, Satish Magar, Vice President – CREDAI expressed his amazement at the world-class amenities offered at Puneville and also described the location at Punawale as nothing short of perfect. Shantilal Kataria, Vice President – CREDAI Maharashtra added that Punawale, Wakad and Hinjewadi are the most promising of Pune’s upcoming real estate locations and that Puneville is indeed an integrated township that has achieved global standards of excellence.
Anil Pharande, Chairman – Pharande Spaces described Puneville as his personal labour of love and the culmination of Pharande Spaces’ constant quest towards perfection in integrated township development. He was also graphic in his praise for Aedas for bringing the full benefit of their global architectural design expertise to bear in this luxury township.
After the Independence Day ceremony, Akash Pharande, Head (Marketing & Sales), Pharande Spaces treated the attending dignitaries and guests to an enthralling project presentation and a guided tour of Puneville and its various state-of-the art features. The sumptuous lunch that followed featured an international cuisine that dovetailed perfectly with Puneville’s uncompromisingly global design and ethos.