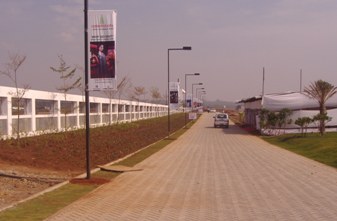 In a rapidly developing city like Pune, it takes a lot to make a new destination stand out from the rest – and to interest those who seek to buy property in Pune.
This city has been spreading steadily outward, embracing most of the rural areas around it and bestowing the benefits of urbanization on them. Areas like Aundh, Baner, Wakad, Pimple Nilakh and Pimple Saudagar have all had their heyday.
However, it is now the turn of the hitherto obscure area of Ravet, located on the North-West side of PCMC and Pune, to receive a wave of the real estate magic wand. By a combination of various advantageous factors, Ravet is now certainly among the most promising of upcoming residential locations on the Pune property market.

Developed by the Pradhikaran-Pimpri Chinchwad New Township Development Authority (PCNTDA) Ravet is extremely strategically placed on latter-day Pune’s map. By virtue of the fact that it is the first town one encounters after leaving the Mumbai-Pune Expressway, it is now known as the Gateway to Pune.
Ravet is, in fact, a confluence point of the old NH4, the Katraj-Dehu Road bypass and the Mumbai-Pune Expressway. Moreover, it is located equidistantly from two major real estate market drivers – the Hinjewadi IT hub and Pimpri-Chinchwad industrial belt.
At this strategic point, JNNURM has now launched a 45-metre, grade-separated, non-signaled four-lane BRT (Bus Rapid Transport) road that provides access to the key area of Aundh in under ten minutes. 40% of the work on this vital conduit is already completed. Pimpri, Chinchwad, Chakan and Talegaon are now quite easily accessible from Ravet.

Pharande Spaces and the Rama Group have joined hands at Ravet in launching an integrated residential township called Celestial City. Located in the focal centre of Ravet, this project is spread over 25 acres and will be developed over three phases.
Since  the current property rates in Pune tend to be unrealistically high, the highest demand is currently for affordable housing. Keeping this in mind, the first phase targets the middle-income group with 2 and 3BHK flats ranging in size from 800 to 1200 square feet. These flats are affordably priced between Rs. 22 to 24 lakh at the initial offering phase.
Taking a cue from this pioneering project, other developers have also acquired land in Ravet, although their projects are yet to be announced. Meanwhile, this location continues to hold the highest promise for the Pune property market.

Apart from its accessibility, which by itself spells gold in real estate terms, there are other important establishments close to Ravet that add to its value as a residential location.
These include the Aditya Birla Hospital, the Bajaj Auto manufacturing plant, SKF, Telco and major educational establishments such as the Indira Institute of Business Management, D.Y. Patil College as well as the Mercedes Benz School.
Its proximity to the Hinjewadi IT hub is of strategic importance, since this fact makes it a new and affordable residential location for software employees there. It is also a location of high value to employees from the Talegaon MIDC and Chakan MIDC. It is, in fact, a binding location for these very important hubs.
Compared to the now staggering Pune property prices, rates are welcomingly low in Ravet, and the appreciation potential is undoubtedly high. It is therefore not surprising that some major names from PCMC’s developer community have taken an active interest in this lodestone location.
We expect it to reach a high level of investment and end-user potential in less than four years, after which rates should show significant and steady upward movement.
Avinash Gokhale is Director – Marketing & Corporate Planning, Pharande Spaces – a leading construction and development firm operating in the PCMC area of Pune, India.
This article may be reprinted with proper attribution to the author and PunePropertyBlog.com